You may recognize this shiny gold Nissan GT-R from about a year ago. Nissan finished this GT-R in a “Bolt Gold” paint finish in celebration of Usain Bolt’s success at the 2012 Olympic Games. The vehicle was auctioned off to help raise money for the athlete’s charitable foundation in Jamaica, Bolt’s native land. 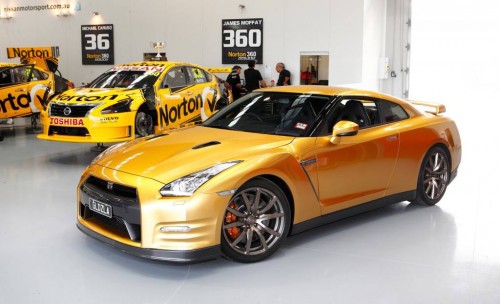 During the time of the auction, the vehicle had not yet been produced. This allowed the winning bidder to be specific regarding his preferences for the vehicle. The car was just recently finished and delivered to its owner during a special ceremony in the Melbourne, Australia.

The car is one of only two Bolt Gold GT-R’S ever produced. The original was a gift from Nissan to Usain Bolt after he was named Nissan’s “Director of Excitement.” Bolt’s GT-R is based on the 2013 GT-4 where the winning bidder was lucky enough to receive the GT-R based on the current 2014 model.

The vehicle also features a number of different gold elements inside the vehicle, as well as the gold details on the exterior.